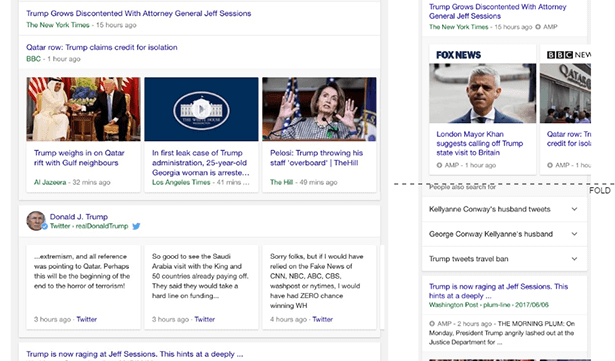 This comes hot on the heels of a stream of encouraging news on AMP from the Google I/O keynotes, presented by VP product management Rahul Roy-Chowdhury and Malte Ubl, creator and tech lead of the AMP Project. These included:

Meanwhile, in late May 2017, Facebook announced an extension to its Software Development Kit (SDK) so that articles produced for FIA will also be publishable as AMP articles, and soon also as Apple News. This is in response to publisher frustration at having to produce content in different formats for different platforms.

Facebook’s move could also be a reaction to a number of publishers reportedly dropping Facebook Instant Articles, and a recognition the FIA is losing ground to AMP.

A recap: What is AMP?

AMP is special type of slim-line mobile webpage, which is an open source project, led, or controlled (depending on your viewpoint), by Google. AMP web pages are faster because:

Any web page could be – and should be – speeded up in a similar way, by reducing page bloat, and using caching via a content delivery network. But the advantage of AMP is Google will only cache AMP pages and Google promotes AMP pages in mobile search above non-AMP pages.

As demonstrated by the following screenshots, of a Google search for “Trump” captured concurrently on a tablet and smartphone, using the tool mobilizer, AMP news stories dominate mobile search results for topical terms. Not just in the picture-led carousel of news, but throughout search results. AMP doesn’t feature at all in tablet results, which is baffling.

What the difference between AMP, Facebook Instant Articles, and Apple News articles?

Facebook Instant Articles and Apple News are news articles from third-party publishers that appear in the newsfeed on the Facebook app and within the Apple News app, respectively. They are tightly controlled by Facebook and Apple and only available to users of those apps. They are also not discoverable through web search or other third party sites or apps.

While these platforms present additional distribution channels for publishers, there is a double drawback to using them: the potential for losing out on direct traffic to their own sites and apps (where they potentially control all the ad revenue), and also the need to prepare articles in three additional formats.

Chartbeat’s research is particularly interesting as it provides an independent assessment of AMP and a comparison with FIA. There’s no inclusion of Apple News in the research, which is unfortunate as little is known about the platform except that it has 70 million users, according to Recode.

Chartbeat compared 360 sites that use both AMP and FIA, from its 50,000 media sites that use its analytics tools. So how did AMP stack up in the race against Facebook?

Let’s start with speed and engagement.

Considering AMP’s focus on speed, this comparison with FIA is embarrassing. However, Google is already working on speeding up AMP.

In his Google I/O keynote, Malte Ubl announced a plan to make AMP twice as fast to deliver “first contentful paint” – a technical term referring to the first ‘interesting bit’ of a webpage that the browser loads.

In practice, this will make it twice as quick to access the important part of a document, e.g. the text in an article, when clicked through from search.

On a daily basis, publishers see three times as many AMP articles viewed as FIA articles, according to Chartbeat. The report authors concluded from these results that content has a longer lifespan on AMP, or receives traffic for more days from AMP, than from Facebook Instant Articles. Article volume matters to publishers. Especially when they have to reproduce content for different platforms, as well as, and in competition with, their own sites and apps.

As noted above, Facebook has opened up its SDK so articles produced for FIA would also be AMP and Apple News ready.

Similarly, if AMP volume continues to plateau for these publishers as Chartbeat suggests it has since the beginning of the year, publishers could become restless. Not everyone is happy with AMP

There has been a growing number of voices of dissent to AMP. A lot of this sentiment is summed up in this provocative Register article, calling on Google to “Kill AMP before it kills the web”.

Andy Favell is Search Engine Watch’s columnist on mobile. He is a London-based freelance mobile/digital consultant, journalist and web editor. Contact him via LinkedIn or Twitter at Andy_Favell.